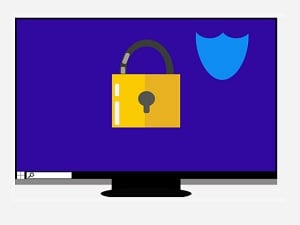 Scammers have breathed new life into an old scam.

For years, the old ‘Law Enforcement Lock’ trick has been used to cheat unsuspecting victims of their hard-earned money. The new wrinkle works like this:

Scammers will redirect users using the Chrome web browser to sites that host a full-screen image of a Windows 10 desktop with a notice that appears to come from local law enforcement agencies. This pages informs the user that their computer has been locked for some unspecified illegal activity.

The groups running this sort of scam make sure to display a legitimate government URL in order to make it look more convincing. Victims of this scam are informed that they can unlock their computer again by paying the fine via credit card, right then and there.

Of course, the computer actually isn’t locked at all. However, this scam has taken in a surprising percentage of users who aren’t paying close attention.

A typical lock screen from the scammers will bear a message that closely follows this script:

“Your browser has been locked due to viewing and dissemination of materials forbidden by law of (country name), namely pornography with pedophilia, rape and zoophilia. In order to unlocking you should (amount and currency type) fine with Visa or MasterCard. Your browser will be unlocked automatically after the fine payment.

Attention! In case of non-payment of the fine, or your attempts to unlock the device independently, case materials will be transferred to (name of local law enforcement agency) for the institution of criminal proceedings against you due to commitment of a crime.”

As you can see from the grammatical errors in the script, this is by no means an official announcement, but it looks real enough that it sends people into a panic, causing them to enter credit card information without thinking.

Naturally, this information is harvested and resold on the Dark Web, putting money in the scammers’ pockets. Make sure your employees are aware of it, and stay vigilant.