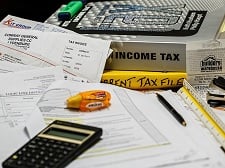 Recently, the Department of Justice brought charges against Babatunde Olusegun Taiwo for using personal information acquired on the Dark Web. He used the information from data breaches to file fraudulent tax returns with the IRS.

He was able to gain enough information to file more than two thousand income tax returns that attempted to claim more than $12 million. The IRS paid out nearly $900,000 before the authorities caught wind of the scam and shut it down, arresting the St. Louis man and sentencing him to four years in prison.

The Special Agent in charge of the investigation, Thomas Holloman, had this to say about the matter:

Taiwo isn’t the only criminal to have recently been caught by the Department of Justice’s drag net. In a separate announcement, the DOJ released details of the case against Hitesh Madhubhai Patel, an Indian national. Between 2013 and 2016, he leveraged call centers to scam victims out of millions of dollars by impersonating the IRS and USCIS. He was threatening victims with deportation, arrest, and jail time unless they paid bogus fines over the phone to his employees.

Patel is due to be sentenced on April 3rd of this year and could face up to twenty years of prison time, in addition to fines of up to a quarter million dollars.

Kudos to the Department of Justice for bringing these crooks to justice. One has to wonder though, for every criminal caught and jailed for activities like these, how many more remain uncaught? Too many, but progress is progress!