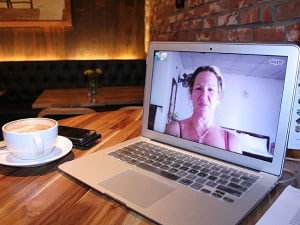 Skype is introducing a new feature to its video call service that users have been asking about for quite some time now.  Background blur.

If you regularly make video calls, you’ve probably been in a situation where such a feature would have come in handy.

It could be anything, really.  Maybe you’re working from home and your place is a mess. Or people keep coming in and out.  Or you’ve got a whiteboard behind you that contains sensitive information you’d rather not let everyone see.

Whatever the case, it’s often true that people wish they could blur whatever’s behind them when they activate their camera.  It’s also a feature that’s been available on Microsoft Teams, so in this case, the Skype development team is playing a bit of catch up.

The new feature uses an AI routine that’s been coded to recognize the human form.  Even better, the AI routine is robust enough that it recognizes hair and hands, so if you tend to get somewhat animated when you talk, the camera will retain its focus on you while conveniently blurring whatever is behind you.

The new feature is available via the latest build of Skype, so if you don’t currently see it on your desktop or laptop, the only thing you should have to do to start using it is to upgrade to the latest version and you’ll be all set.

While it’s certainly not the most critical new feature addition we’ve seen in recent months, it’s certainly a welcome one. It’s both useful and practical in a variety of situations.  Everyone, from people working at home to independent contractors, to Enterprise users, can and will benefit from the new background blur.  Kudos to the Skype development team for delivering the goods.